How Do I Get From The Airport to Downtown St. Louis? 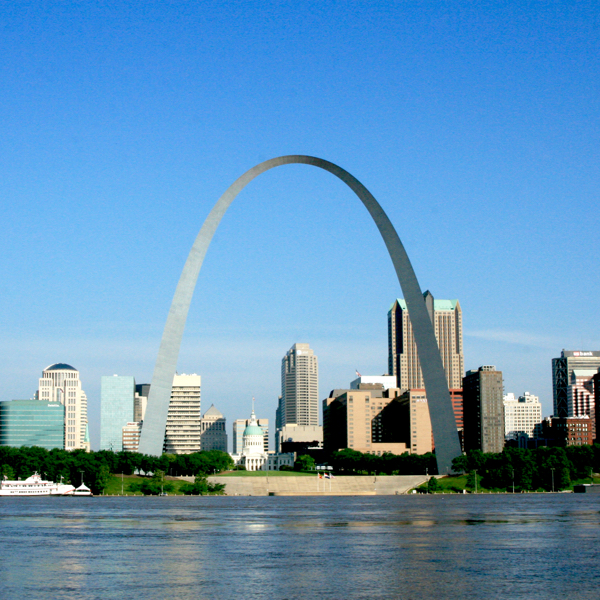 If you’re flying into St. Louis and want to do some sightseeing, you’ll be pleased to learn that many of St. Louis’ hottest downtown attractions are just a few miles from St. Louis Lambert International Airport (or “Lambert” as it’s more commonly known). While technically closer, the St. Louis Downtown Airport is reserved for private flights only, so chances are that you’ll be flying into and out of Lambert. Fortunately, Lambert and downtown St. Louis are separated by just 15 miles of highway 70, so while walking would likely be out of the question, reaching one or the other by car is no problem at all. At most times throughout the day, the drive will take around 20 minutes (though morning and evening rush hours may delay your trek to some degree). If you’re wanting to head downtown from the airport (or from a nearby St. Louis Airport hotel) you have several options to choose from:

Shuttle Service: There are several independent shuttle services that can get you from the airport to downtown and back quickly and conveniently. If you’re on a tight schedule, tight budget, and don’t want to spend the time driving or looking up directions, an airport shuttle service might be just the solution.

Taxi: There are two taxi terminals at Lambert Airport and exact fares will vary (NOTE: each taxi institutes a $4 per pickup fee in addition to incurred trip rates). Reservations are suggested but not required.

Ride Share Services: You’ll have no problem finding an Uber or Lyft driver near the airport or anywhere downtown to help you get where you need to go. Depending on your downtown destination, parking might get a little on the expensive side (especially during major events), so nothing more convenient than than curbside service with no parking fees.

MetroLink: MetroLink is a light rail, public transportation option that stretches 46 miles throughout the St. Louis metropolitan area. There are 37 stations including two at the airport and several in the downtown vicinity at major attractions including Union Station, Busch Stadium, and Laclede’s Landing.

Bus: The airport is home to a Bus Port for MetroBus and Greyhound services. The former, like MetroLink, is a convenient public transit system which can get you to downtown or wherever you’re headed in the St. Louis region. And if you’re venturing a ways further than downtown, you can always check in with the friendly Greyhound team.
Rental Car: With seven rental companies to choose from (Alamo, Avis, Budget, Enterprise, Hertz, National, and Thrifty), you’ll find no shortage of rental car options St. Louis Lambert International Airport. All companies offer 24/7 shuttle service between your dropoff location and the main terminal.

Limousine: Feel like rolling into town like a celebrity? We can’t blame you. There are plenty of limousine services (as well as sedan and van services) that can give you and your party the rockstar treatment as you tour the sights of the Gateway City.